When is the best time to fly to Tokyo?

May is typically the best time to fly to Tokyo, but there are other times where great deals are available. August sees the temperatures in Tokyo peak to their warmest. October tends, on average, to see the most amount of rainfall.

When is the best time to book flights to Tokyo?

Booking 54 days in advance of your planned departure date is, on average, the best time to get cheap flights to Tokyo. The general trend is that the closer you book to the departure date, the more expensive your flight will be.

Which day is cheapest to fly to Tokyo?

The cheapest flights to Tokyo are usually found when departing on a Monday. The departure day with the highest cost at present is Saturday.

Flights in the morning are typically the cheapest time of the day to fly to Tokyo. Flights at midday are usually the most expensive.

Tokyo is located on Honshu, Japan’s largest island. This neon-bathed city is one of the 47 prefectures of Japan, home to the Imperial Family and Imperial Palace, seat of government and home to 12 million souls, making it one of the most densely populated cities on the planet. Tokyo is a futuristic and technologically advanced megacity, but retains traces of an ancient, more contemplative approach to life.

To get a feel for the bustling metropolis, visit the Tsujiki fish market, where you’ll find freshly caught creatures of the deep, destined to lie, perhaps, on those little slabs of sushi rice. For a bird’s eye view, whizz up to the observatory of the Tokyo Tower, from where you can even see Mount Fuji and Mount Tsukuba. And for a bargain, head to the colourful Akihabara (or Electric Town), the best place for electronic, computer and anime and otaku items.

For moments of calm, stroll through the East Gardens of the Imperial Palace or visit Meiji Jingu, the Shinto shrine just behind Harajuku station.

Thanks to the weak yen, Japan has become more affordable for travellers in recent years. Cheap flights to Tokyo take about 11 hours from London and touch down at Narita.

Winter is cold in Tokyo and the temperature occasionally drops below freezing. Spring has pleasant warm days. Summer is hot and muggy. It gets cool again in the autumn, with temperatures in the teens-20s (Celsius). August is the warmest month with high humidity and temperatures in the mid-20s, and January is the coldest with temperatures below zero. The monsoon season lasts about a month starting around mid-June. Typhoons are widespread in Japan in September.

When is the best time to fly to Tokyo?

Spring and autumn are the most temperate seasons. Despite the heat and humidity of the summer, rates in the summer are going up. Many local festivals are celebrated in Tokyo in July, and the school summer holiday runs from the end of July through August. Peak travel times for flights to Tokyo tend to fall around Japanese holidays when reservations need to be booked far in advance.

Tokyo is known internationally for having great public transport. It’s clean, safe and efficient. Tourists usually stick to the subway or Japan Railways (JR). The subway has 13 different lines that run from 5am to midnight. Avoid the rush hours if possible as they can get extremely crowded. You can buy a Tokyo Combination Ticket which offers unlimited rides on the Tokyo trains, subway and bus lines for one day. Taxis are safe, clean and comfortable, but among the highest-priced in the world. Drivers rarely speak English, so it’s a good idea to have your destinations written in Japanese before boarding. 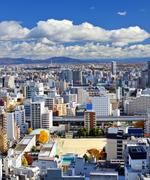