Flights to Tanzania in 2021

Cheap flights to Tanzania found for this year

Watching the migration of wildebeest in the Masai Mara; trekking up Mount Kilimanjaro; lazing on a white sand beach in Zanzibar or haggling for beads at Stone Town’s market: Tanzania should be the first port of call for any traveller wanting the full “African experience”. Tourists book flights to Tanzania for a huge variety of holidays, for this country really has it all. The vast landscape of the Masai Mara is home to all the big game. As well as the annual migration, there are lions, elephants, giraffe, monkeys and much more to be seen from a range of various safari lodges.

From the hot plains of the Masai Mara, it is a short trip to “Kili” the only snow-topped mountain in Africa. Hikes up to its peak are regularly undertaken, and nearby Moshi is a quiet town to stop off at en route. Down on the Tanzanian coast, Dar es Salaam is less forgiving to a casual holidaymaker, but this is a modern-day African city in every respect. Most of the country’s industry occurs here, and all Tanzania flights arrive in Dar.

Across the sea, the tropical island of Zanzibar has long been a favourite destination for honeymooners. Atmospheric Stone Town is a maze of Portuguese-style stone buildings, with some grand colonial hotels on the seafront. Zanzibar’s coastline is dotted with white sand beaches, fringed with palm trees and relaxed backpacker hotels. The pace of life is slow and laid-back here, with little to do most days but snorkel and watch the dhows come in with the latest catch.

Tanzania’s rainy season starts in March and runs until May. Tropical downpours are usual. Along the coast and on the islands, showers are heavier and more predictable (every afternoon). Humidity levels are high with temperatures in the low to mid 30s. There are also “short rains” months – November and December – when rainfall is lighter than the “long rains”. The dry season months are June, July, August, September and October. You may still get rain during these months. Think fine sunny days and clear skies.

When is the best time to fly to Tanzania?

Tanzania is a year-round destination. Game viewing is excellent all year-round, but to witness the annual wildebeest migration during which millions of animals move from the Masai Mara in Kenya to the Serengeti in Tanzania, visit between December and April. It is one of the wonders of the natural world. Not all animals migrate however. For birdwatchers, Tanzania is an excellent location all year round, but to really see the country at its best, book a flight to Tanzania during the UK’s winter months. This is when more than 150 species of birds migrate south.

Visit after the rainy seasons (June, February for example) to really see Tanzania’s flora at its most lush and glorious.

There are two railway systems – the Tanzania Railway Corporation operates two lines, the central line from Dar es Salaam to Tabora and one to Tabora to Mwanza port on Lake Victoria. The Tanzania to Zambia Railway Authority (TAZARA) links Dar Es Salaam with various destinations.

Bus services are plentiful. Scandinavian and other lines provide good service throughout the country. Buses don’t move until they are full however so don’t take the timetables as gospel.

The quality of the roads varies greatly. If renting a car, a four-wheel drive is best, albeit expensive.

To get to the islands off the coast of Tanzania including Zanzibar and Pemba, there are boat (including ferry, catamaran, hydrofoils, or dhow) and air services. Azam Marine, for example, offers passage from Dar Es Salaam/Zanzibar or Pemba/Zanzibar.

See alternative destinations where airfare is generally forecast to be close to Tanzania flight prices. 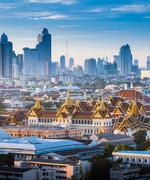 Popular regions to fly to in Tanzania

Not sure where to visit in Tanzania? Start by selecting one of the most popular places in Tanzania below to filter down your possible destination.

Select your preferred flight destination in Tanzania from the list below.

Select your preferred route to Tanzania from Hong Kong below

Not set on Tanzania? See the cheapest flights to Hong Kong. Airfare prices updated on July 29, 2021.