The best prices found for NBO flights for June, July

Cheap flights to Kenya found for this year

When is the best time to book a flight to Kenya?

The price you pay for your flight to Kenya may vary depending on when you book. For the best chance of a lower fare, look to book 49 days in advance of your trip. Fares are likely to increase a fortnight or so before your departure date.

Which day is cheapest to fly to Kenya?

The cheapest day to fly to Kenya is usually Tuesday. At the moment, Thursday is the most expensive.

What time of day is cheapest to fly to Kenya?

To get the best value, try booking a flight in the afternoon when visiting Kenya. Generally the prices will increase for flights in the evening as these tend to have higher demand.

With a spectacular landscape that includes the Maasai Mara reserve, Rift Valley, Kikuyu moorlands and Mount Kenya (the second largest mountain in Africa) natural habitats have arisen to suit all types of wildlife. Kenya is the number one destination for big game.

From safari lodges throughout the country, tourists head off to spot elephants, lions, giraffe, buffalo and monkeys, baboons, cheetahs… the list is almost endless.

Naturalists book Kenya flights to explore its varied terrain: forests, moors, mountains and huge expanses of plains, across which the famous migration of wildebeest takes place once a year.

Kenya’s rainy season lasts from April to June and October to early December. It’s hot and humid on the coast all year round, but onshore breezes make it more comfortable. It’s hot and dry in the lowlands while the highlands are more temperate and cooler at night.

When is the best time to fly to Kenya?

The annual migration of wildebeest and other animals across the plains of the Maasai Mara takes place between June and September. Consequently, this is the peak season for safaris and prices rise drastically across the country.

The rainy seasons are the main off-peak seasons, though still a good time to visit. Prices can be cheaper and there are better deals to be found. Though you will miss the migration, there are still plenty of big game to be spotted, as well as the other attractions of mountains, diving on the coast and the ancient tribe of the Maasai.

October-January, though still off-peak, is the best time to visit for snorkelling as the seas are at their clearest. January and February are the hottest and driest months, however, it can be easy to spot wildlife congregating around water holes.

There are many scheduled flights available from Jomo Kenyatta Airport in Nairobi to domestic destinations such as Mombasa, Lamu or the game reserves of the Maasai Mara. In total, Kenya has around 250 airports and internal flights are cheap, so it can be the most efficient way to travel both for time and cost.

Trains are available, though generally slow and not very reliable. Railways have been allowed to deteriorate a lot over recent years.

Shared taxis and minibuses, called matutas,are the most popular means of transportation for short distances and between cities. They used to be very dangerous, but a recent government crack-down on safety has improved the services somewhat. It is often recommended not to use matatus at night.

Rental cars are available from main cities. Remember that road conditions will be poor if you’re considering travelling any way off the beaten track (anywhere off the main roads that connect major urban centres). Hiring a four-wheel-drive vehicle is advisable.

See alternative destinations where airfare is generally forecast to be close to Kenya flight prices. 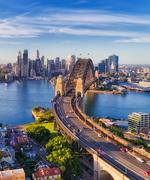 Select your preferred flight destination in Kenya from the list below.

Select your preferred route to Kenya from Hong Kong below

Not set on Kenya? See the cheapest flights to Hong Kong. Airfare prices updated on June 21, 2021.